Skip to content
Hold The Control Key To Zoom The Map.

Tinker Creek is a major tributary of Roanoke River, over twelve miles long, and a greenway along this corridor has always been included in greenway plans. The headwaters begin in Botetourt County, and the corridor is rich in natural and cultural resources, including many historic structures such as old mills and houses like Monterey, Bellmont, and Harshbarger. The creek is an urban trout stream and connects eight parks, two golf courses, and six schools. The first section of the greenway from Roanoke River to Wise Avenue opened in 2003, and another section from Hollins University to Carvins Cove opened in 2012. The 2018 Greenway Plan includes a study of alternative locations for Tinker Creek Greenway (Appendix E). The City of Roanoke has begun design of its next section from Wise Avenue to Mason Mill Park and expects to go to construction in 2022-2024. 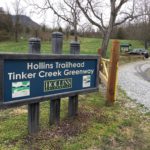 (#32 on the Carvins Cove map) connects the Hollins Trailhead to the Boat Landing. Starting on the back side of Hollins University campus, this intermediate trail starts with steady climbing, first through pines and then hardwoods. It crosses under a large powerline, crests the ridge, and then is a steady downhill to the Boat Landing […] 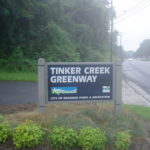 This section of Tinker Creek Greenway begins at a dramatic 660-foot bridge connecting to Roanoke River Greenway. From there, Tinker heads north to Wise Avenue, with an extension into Fallon Park. Special features include the big bridge overlooking the confluence of the two waterways, the opportunities for fishing and bird watching, and the Cyclocross Course […]

This trail crosses the following jurisdictions: